It's time for David Blair-Loy to stop mincing around and sue Southwestern College, already 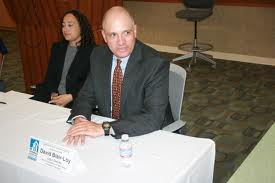 Who's side is he really on? David Loy discusses lawsuits spearheaded by other chapters of the ACLU at Thomas Jefferson School of Law on Aug. 24, 2011.

UPDATE FEB. 2012: It's beginning to be clear that San Diego ACLU's David Loy is not a big fan of free speech about what's really going on in public schools.

See other new posts re David Loy and earlier posts under his former name of David Blair-Loy.

I am more concerned than ever about the motivations of local ACLU head counsel David Blair-Loy. He seems deeply concerned with his own career, as evidenced by the effort he must have put in to get busy lawyers to participate in the Daily Transcript's yearly opportunity for lawyers to promote themselves.

The Daily Transcript does not evaluate the lawyers it chooses as "Top Lawyers" of the year; there is no panel of experts making the choice. Nor do all the lawyers in town participate in the vote.

Instead, the voters select themselves. To win, a lawyer has to get his pals to send in ballots. (There is even a section for insurance lawyers.) The Daily Transcript seems to be promoting itself by exploiting lawyers who feel the need to promote themselves. The most highly regarded lawyers do not seem to participate in this contest.

David Blair-Loy has exerted himself mightily for two years in a row to become one of the many "winners" of this contest.

David Blair-Loy, legal counsel for the San Diego ACLU, gets along too well with school attorneys. He even got an award from the bar association for "high civility" in dealing with them, and with other attorneys.

But the situation at Southwestern has gone on long enough. It's time to stop writing letters to Jonathan Pearl and Raj Chopra, and to take some action.
Posted by Maura Larkins at 11:18 AM

Ummm, you might not want to rag on the folks who are actually taking on this ridiculous policy and administration. The legal process is long and cautious. You generally don't want your lawyers to be shooting from the hip.