...[T]here’s at least one stressful thing second-graders at Godley Elementary School in Texas won’t have to worry about this year: homework.

Brandy Young, a second-grade teacher at the school, passed out a letter to every parent at a “Meet the Teacher Night” ahead of the start of the school year to explain her new homework policy -- or should we say, no-homework policy.

A pleased parent posted a photo of the letter on her Facebook page, and it went viral with more than 59,000 shares...

“There will be no formally assigned homework this year,” Brandy Young explained in the letter. “Rather, I ask you spend your evenings doing things that are proven to correlate with student success. Eat dinner as a family, read together, play outside, and get your child to bed early.”

The teacher said homework just wasn’t working for her classroom anymore. So, she decided to make meaningful change.

“[Students] work hard all day. When they go home they have other things they need to learn there,” Young told CBS News. “I’m trying to develop their whole person; it’s not beneficial to go home and do pencil and paper work.”...

Posted by Maura Larkins at 12:01 AM No comments:

Teacher of the Year urges Gompers’ community to be accountable

I loved teaching primary grades because I could teach kids basic skills instead of teaching over students' heads, forcing them to go through the motions, pretending they understand what they're doing. But even in primary grades teachers face pressure to teach at the level of the students' age rather than their actual level. And most or all of this pressure usually comes from other teachers.


Teacher of the Year urges Gompers’ community to be accountable

by Brad Racino
May 25, 2017
inewsource.com
More than 25 teachers and students have come forward to talk about allegations of grade inflation and unrealistic academic expectations detailed by inewsource last week in an investigation of Gompers Preparatory Academy. The school is a sixth-through-12th grade charter in southeastern San Diego that promises “students can succeed at the university of their choice.”

Maria Miller, a resident of nearby Encanto, was named Teacher of the Year during one of her three years at the school. She’s currently an 8th-grade teacher at Lewis Middle School.

Miller was impressed with the order and procedures where once stood chaos, gangs and drugs. She was excited as a first-year teacher, but said she immediately noticed a problem when her advanced placement (AP) history students couldn’t read at a sixth-grade level.

She has concluded there is a glaring disconnect between the school’s leadership and the surrounding Chollas View community, as well as a need for partnerships with the elementary schools that feed into Gompers.

When I actually started to develop my lessons, and have my classroom and do what it is that I wanted to do … I started to run into some resistance in terms of how I had been trained for an AP class and what the expectation of an AP class was.

Students I knew were reading at a sixth-grade level were taking an AP class...


I had a lot of resistance in terms of how fast and the amount of work that I was giving the students. And then the students themselves. I recall a student running out of my room because they couldn’t write a summary. ‘I don’t know what you’re asking me to do.’ This was 11th grade... LA JOLLA, Calif. (KGTV) -- - A sexual predator masked as a teacher at one of the top charter high schools in the nation. The family of the girl he molested spoke only to 10News as they launch a full-scale lawsuit against the teacher and the Preuss School.

In a place where students should be safe a 17-year-old girl was manipulated and abused.

A teacher at the school, Walter Solomon molested the teen while he was teaching at the Preuss School. He was convicted in October, but the case is only now being made public...

A formal complaint from the victim's attorneys detail their relationship, saying Solomon was "known to the students at Preuss as a 'Pedo' which is short for pedophile..."

...Now, the victim's attorneys are going after the school and saying there were plenty of red flags.

"This teacher was actually grooming my client and grooming her to the point where he could ultimately sexually abuse her," said Steve Estey...
Posted by Maura Larkins at 4:46 PM No comments:

Despite A’s at Gompers, former student talks about feeling unprepared

First I want to say that it was brave and generous of UCSD student Felipe Morfin Martinez to come forward and say that his K-12 education did not adequately prepare him in science. I'm glad he brought that issue to the attention of the public.

I noticed that Felipe blames only the director of his high school--not his teachers--for his lack of academic preparation in science. I think Felipe is allowing his good personal relationships with his teachers to interfere with his assessment of the situation.

Also, it's possible that Felipe wasn't really much interested in science. He says,

"I wanted to do science and I guess it clicked on me when I was probably in 10th grade or ninth grade where it was like, ‘my dreams aren’t going to happen because I can see it. I’m not ready for that, I’m not prepared for that.’"

Why would he give up on science in "10th grade or ninth grade"?

I know from personal experience that an effective teacher can teach kids to thoroughly understand math and science concepts. Felipe's problem isn't that his classes weren't advanced enough.  Felipe must have taken courses up to and including pre-calculus to get into UCSD. He could also have taken two more years of calculus.

The problem is that only a minority of kids deeply understand basic concepts. And often those kids learned more at home than at school.

During my years teaching in elementary school I far too frequently heard teachers claiming that the math was too hard for any teacher to understand. I once contradicted such a teacher, and then I learned to keep my mouth shut.


Despite A’s at Gompers, former student talks about feeling unprepared

inewsource published an investigation last week into the quality of education at Gompers Preparatory Academy — a nationally recognized charter school that promises “students can succeed at the university of their choice.” After the story ran, Felipe Morfin Martinez came forward to share his experience.

Morfin Martinez graduated from Gompers in 2016 and was awarded a full-ride scholarship to the University of California San Diego where he is studying communications.

He told inewsource that he realized early in his Gompers education that he wasn’t being challenged in his classes. Despite earning straight A’s, he said, he knew he wasn’t prepared to achieve his dream of pursuing a career in science. When he shared his concerns at home, he said, his parents responded: “You don’t believe in yourself, look at your grades.”

All Kids Can Have Great Teachers (Without Firing Any Teachers

The best teachers should be able to rise far above average teachers on the salary scale — and they should have far more responsibility. All Kids Can Have Great Teachers (Without Firing Any Teachers

No one really knows what’s going on in individual public school classrooms. Observations by principals tend to be fleeting and few. We don’t need to fire anybody, but we do need to use highly-skilled teachers and ordinary teachers where they can do the optimal good.

The truth is that the critical moments in learning don’t happen continuously five hours a day. They add up to at most a couple of hours each day, and probably much less.

The best teachers should be able to rise far above average teachers on the salary scale — and they should have far more responsibility. In my plan, each classroom would have a full-time regular teacher.

Several classrooms would share a master teacher, who would be responsible for student progress, teaching lessons part-time and guiding the regular teacher.

Here’s the comparison for four classrooms and one extra salary (in thousands):

If we add more money, we could have more master teachers. Meaningful evaluations of teachers would have to be instituted. Current evaluation systems are worse than useless.

My plan would call for frequent observations by both master and regular teachers, who would observe classrooms in other districts to keep school politics at bay. The observations would have a beneficial side effect: they would allow teachers to pick up new ideas.
Posted by Maura Larkins at 8:15 PM No comments: 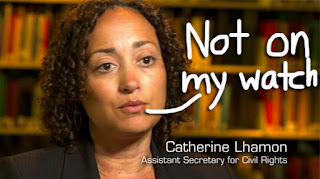 Catching up with Catherine Lhamon
By Benjamin Wermund
02/09/2017

The Obama administration’s actions to combat campus sexual assault rocked higher ed. Now, college leaders and advocates are wondering what to expect from the Trump administration.

Lhamon said she would’ve expected DeVos to walk into her Senate confirmation hearing prepared to say whether she would maintain the Obama administration's guidance that spelled out the standard of evidence for sexual assault administrative hearings at colleges and universities.

“I would have hoped that she had heard from all sides before that date, but I look forward to her getting up to speed,” Lhamon said. “Also, I noted with interest her saying that her mother's heart is ‘piqued’ by the issue. I hope it is piqued in ensuring civil rights for all students under her charge.”

— DeVos, who started work on Wednesday, did not specifically mention the issue of campus sexual assault in a speech to staff. But she said she's committed to ensuring that students have "learning environments that foster innovation and curiosity, and are also free from harm." At her confirmation hearing, DeVos said it would be premature to say whether she’d keep the existing guidance in place...
Posted by Maura Larkins at 3:43 PM No comments: