School officials and their attorneys make sure nothing ever changes: San Ysidro spent almost half a million on Manuel Paul

The shenanigans never stop. It's ridiculous to keep pursuing Manuel Paul without cleaning up the corruption that exists currently. Paul was just playing the game; he just wasn't as good at it as most school officials, attorneys, etc. who get wealthy off of schools. The truly greedy players stay in power while the public is distracted by small-time crooks like Paul.

Even so, the money spent on lawyers regarding Manuel Paul is negligible compared to the $3 million MiraCosta College spent on a case involving $305 in stolen water for palm trees. In the end, MiraCosta let the palm trees die. Obviously, many, if not most, schools are run for the benefit of individuals, not the public.

San Ysidro School District is still trying to recover more than $291,000 from disgraced former superintendent Manuel Paul, and has racked up far more than that in legal bills trying to make it happen.
The district has paid Long Beach law firm Leal-Trejo $480,000 as part of the lawsuit against Paul, filed in February 2015, according to figures provided to Voice of San Diego in response to a Public Records Act request...
“I will consult with the Board of Education to find the best remedy for this case,” Deputy Superintendent Arturo Sanchez-Macias wrote in an email. Sanchez-Macias, who is currently serving as interim superintendent, declined to comment further on the fees...
Posted by Maura Larkins at 9:00 AM No comments:

The Five Dysfunctions of CVESD; Erika Taylor removed as principal at Greg Rogers


CVESD can't talk to reporters or parents about why it removed Erika Taylor as principal. That's a fact. They might spread rumors, but they can't talk on the record.

So I have a suggestion for Greg Rogers parents.

The deeper problems is that CVESD has a history of covering-up events in schools. Like just about every school district in the country (and in the world), CVESD is a dysfunctional organization.

So I wish Greg Rogers parents would campaign against school secrecy instead of demanding action in a case where they know nothing about what's going on.

I'd advise parents not to be completely swayed by a few high-profile projects of any principal. What really matters is how the school is being run. Don't be totally enthralled by bread and circuses.

It's possible the school has been run badly by Erika Taylor.

On the other hand, it's possible she's a fine principal and this is another case of teachers manipulating the school district in an exercise of political power. I have seen that happen in CVESD schools.

I'd bet good money (of course, the definition of "good" is determined by my income) that there is a long history of angry staff meetings at this school. I once taught at a school where the staff meetings consisted of teachers screaming at the principal for a significant part of two-hour meetings that involved endless complaints from teachers. Yes, I mean screaming, as in speaking in an extremely loud, shrill voice. 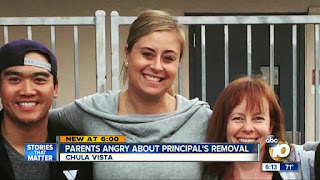 I bet there have been big problems but the parents have been kept in the dark. I think parents should be part of the solution of the problems, not treated like outsiders at the school.

Here's my suggestion for parents: START A PARENT ORGANIZATION THAT IS ALL ABOUT OPEN DISCUSSION OF SCHOOL PROBLEMS.

(The PTA is too political and it's under the control of the district. So start your own organization. There are too many secrets that should not be secrets. You should know how decisions are made about your kids. You should know what's happening at your kids' school )

I urge you to join with middle school parents. They know all kinds of things about your school. And you need to start learning about the schools your kids will attend in the future.

It would be ideal if some  teachers would come to your meetings and explain their expectations and their policies. You can learn a lot from teachers. But the teachers should also listen to your concerns. Some teachers are willing to do so.

Maybe you could call your group the "Parent Teacher Problem Solution Society." I'd suggest The Five Dysfunctions of a Team by Pat Lencioni as a guiding document.

Last month, Erika Taylor was removed as principal of Greg Rodgers Elementary without notice or explanation.
.....“By removing Ms. Taylor, you failed the children,” said Erika Taylor’s mother, Anne Taylor.
The board did not respond to the public comments...