"They found large negative results in both reading and math. Public elementary school students who started at the 50th percentile in math and then used a voucher to transfer to a private school dropped to the 26th percentile in a single year. Results were somewhat better in the second year, but were still well below the starting point."

...In June, a third voucher study was released by the Thomas B. Fordham Institute, a conservative think tank and proponent of school choice. The study, which was financed by the pro-voucher Walton Family Foundation, focused on a large voucher program in Ohio. “Students who use vouchers to attend private schools have fared worse academically compared to their closely matched peers attending public schools,” the researchers found. Once again, results were worse in math.

Three consecutive reports, each studying one of the largest new state voucher programs, found that vouchers hurt student learning. Researchers and advocates began a spirited debate about what, exactly, was going on.

Mark Dynarski of the Brookings Institution noted that the performance gap between private and public school students had narrowed significantly over time. He argued that the standards, testing and accountability movement, for all its political shortcomings, was effective. The assumed superiority of private schools may no longer hold.

Some voucher supporters observed that many private schools in Louisiana chose not to accept voucher students, and those that did had recently experienced declining enrollment. Perhaps the participating schools were unusually bad and eager for revenue. But this is another way of saying that exposing young children to the vagaries of private-sector competition is inherently risky. The free market often does a terrible job of providing basic services to the poor — see, for instance, the lack of grocery stores and banks in many low-income neighborhoods. This may also hold for education...
Posted by Maura Larkins at 8:17 PM No comments:

" College classes start too early in the morning for students' brains.

"While most colleges have start times of around 8 a.m., Jonathan Kelley advises NPR Ed that the ideal start time would be more like 10 or 11 a.m. The reason: People fall into different "chronotypes," which people know as "early birds" and "night owls." In this sample, night owls outnumbered early birds by far. The reasons for this are biological, says Evans.

Posted by Maura Larkins at 1:12 PM No comments:

Are we actually setting kids back with our emphasis on academics in kindergarten?

I've been in education for 20 years, and there's a disturbing trend afoot in kindergartens around the US
Christopher Brown
Business Insider
Apr. 17, 2017

Research has consistently shown classrooms that offer children the opportunities to engage in play-based and child-centered learning activities help children grow academically, socially and emotionally. Furthermore, recess in particular helps children restore their attention for learning in the classroom.

Focus on rules can diminish children's willingness to take academic risks and curiosity as well as impede their self-confidence and motivation as learners — all of which can negatively impact their performance in school and in later life.

Giving children a chance to play and engage in hands-on learning activities helps them internalize new information as well as compare and contrast what they're learning with what they already know. It also provides them with the chance to interact with their peers in a more natural setting and to solve problems on their own. Lastly, it allows kindergartners to make sense of their emotional experiences in and out of school.

Posted by Maura Larkins at 11:27 AM No comments: 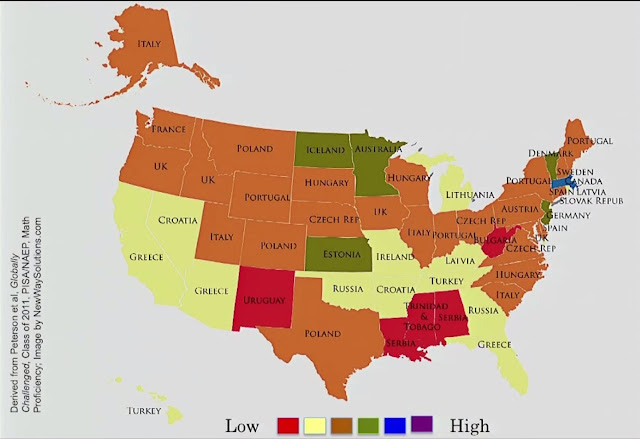 This researcher asked kids what's wrong with U.S. schools. Here are their ideas.

Who knows the most about school? Students.
Alisha Huber
Upworthy
May 22, 2015

This is not news: America does pretty badly when it goes up against other countries academically. This is true even if we take it one state at a time—no single state, no matter how wealthy or small, matches the top scoring countries...
Posted by Maura Larkins at 3:49 PM No comments:

One of the 12 former Choate Rosemary Hall teachers accused this week of sexually abusing students has spent most of the 18 years since the allegation surfaced as a teacher and administrator at Connecticut public schools that were not made aware of his past, including as a Litchfield high school principal until last week.
Jaime Rivera-Murillo was one of 12 former teachers at the prestigious Wallingford boarding school accused of inappropriate relations with students in a blistering 48-page report released Thursday by Choate officials.
Rivera-Murillo, who resigned as principal at Wamogo Regional High on April 6, was accused by a 17-year-old girl of forcing her to have anal sex in a swimming pool during a 1999 school trip to Costa Rica, the report said.
Rivera-Murillo, who denied the allegations to school investigators, was fired from Choate in 1999. He subsequently worked as a teacher at Henry Abbott Technical High School in Danbury, Harrison High School in New York and Newtown High School, where he was also assistant principal.
None of the schools was notified of the allegations until Choate informed the superintendent of the Wamogo district last month, just before Rivera-Murillo was placed on leave...

It seems that a lot of schools and churches readily cover-up sexual abuse of children. Board members should insist on being informed of all allegations of abuse, and should be held responsible.

Public schools seem to be as bad as, if not worse than, private schools in covering up problems.

Choate Rosemary Hall is known for being one of the most prestigious boarding schools in the country, an institution with alumni like President John F. Kennedy, two-time presidential nominee Adlai Stevenson and playwright Edward Albee.

The elite Connecticut private school is also a place that has for decades fostered a pattern of sexual abuse and misconduct between teachers and students, according to a troubling new internal investigation initiated by the school to address abuse allegations.

...The report names 12 former Choate faculty members who engaged in what it said were substantiated instances of sexual misconduct with Choate students dating back nearly 60 years, five of whom are no longer living. The report recounts the alleged abuse in explicit detail, documenting the experiences described by 24 survivors, some of them as recently as 2010.

The report notes that in some cases the school acted swiftly to address the alleged abuse, but in many cases the school failed to alert police or allowed faculty members to resign, avoiding serious legal consequences.

“The detailed content of this report is devastating to read”...

Posted by Maura Larkins at 1:36 PM No comments: