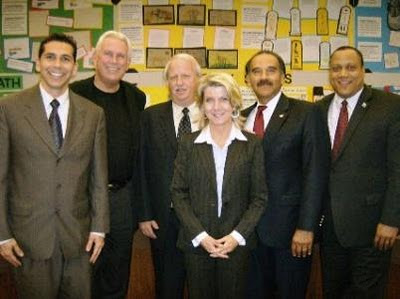 Chula Vista Elementary School District superintendent Lowell Billings will retire in December of this year. Here is his letter announcing his retirement.

It remains to be seen whether there will be any real changes at the district, or if this is merely a matter of personalities. Billings and the long time board members developed a lot of personal loyalty to each other during years when the district was involved in some expensive wrongdoing. But will the new board look for new lawyers and start obeying the law and the contract? That is what reformers hope for, of course, but political office changes people. Officials often start with the best of intentions, but end up protecting their incumbency instead of their principles.

Billings notes that Peter Barron Stark will help in the search for a replacement.

Peter Barron Stark knows CVESD pretty well. He actually was called in to help when teachers at Castle Park Elementary started going out of control in the mid 1990's (before I myself became a teacher at the school).

Mr. Stark failed to bring about any meaningful understanding or system for communication at the school. Within a few years, the district was paying $100,000s in legal bills to defend teachers who decided to destroy the school rather than give up the power their clique had achieved. The clique pretty much wagged the dog. Assistant superintendents Richard Werlin and Lowell Billings agreed to the demands of these teachers even when they demanded that the district violate the contract and the law. Then Billings tried to establish control over the school in 2004, but it was too late. The Castle Park Five got the local media to portray Billings as a power-hungry egomaniac.

Billings will be remembered for his mishandling of the Ana Stover case and the Danielle Cozaihr case, as well as my case, the Maura Larkins case. See web page.

My sympathies to Pamela Smith and Larry Cunningham, board members who worked so closely with Mr. Billings for so long.

PRESS RELEASE
FOR IMMEDIATE RELEASE
MONDAY, APRIL 26, 2010
Posted by Maura Larkins at 11:52 AM