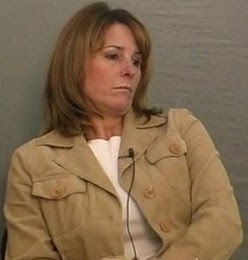 Photo: CVE President Peg Myers apparently has some reason for her decision not to reveal election results on the Chula Vista Educators website.

When the secretary told me once again this morning that she didn't have the election results, I told her what I had learned: Treasurer Nancy Potts had resigned two weeks ago--before the votes were counted in the May 20, 2009 run off election. Kathleen Fernandez won by default. (Each of the other offices had only one person running.)

(Humans are funny, aren't we? In this case, the young woman preferred to let me know that she had been lying rather than allow me to think I knew something she didn't know.)

I don't hold the girl who answers the phone responsible for this deception. The blame rests squarely with Peg Myers.

This is not appropriate protocol; it's a shameful way to conduct business. A public school teachers union should not be secretive; it contributes to public mistrust of CTA, and for good reason. I would like to see CTA become truly democratic, like California Federation of Teachers. CFT has real elections; decisions are made at the ballot box, not it the back room.

I hope Kathleen Fernandez won't be co-opted into Peg Myers' corruption. If they ask her to keep a secret that shouldn't be kept, I hope she'll say no. Of course, she'll get thrown off the board, but there are worse fates--such as being on the board when illegal acts are committed by CVE. Unfortunately, CVE elections seem to be about personalities, not policies.

Chula Vista teachers seem to like to let CTA director Jim Groth and CVE President Peg Myers do their thinking for them. As the CVE website says, "CVE forms a representative body capable of developing group opinion and speaks with authority for members."
Posted by Maura Larkins at 11:30 AM