Chief Justice John Roberts: Judge Brent Benjamin doesn't have to recuse himself just because of a measly $3 million campaign contribution 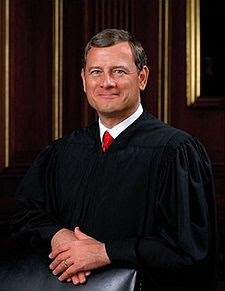 Remember Senate confirmation hearings for Chief Justice John Roberts? Roberts seemed like a reasonable guy, didn't he? Apparently he fooled a lot of senators. Surely even the Republicans who supported him must be embarrassed by his dissent in this case in which a $3 million campaign contribution to a judge was found to be sufficient reason for a judge to recuse himself in a case involving his benefactor. It's the sort of thing we expect from Antonin Scalia and his worshipful sidekick Clarence Thomas. And we're learning to expect this sort of this from Sam Alioto.

On the bright side, Republicans can take pride in Justice Anthony Kennedy's majority ruling against Judge Brent Benjamin and the CEO of A.T. Massey Coal.
Posted by Maura Larkins at 10:01 AM