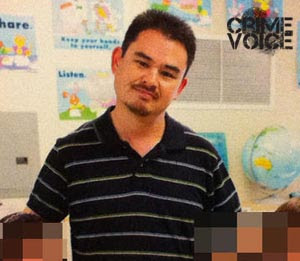 It would be nice if Chula Vista Elementary School District were as forthcoming with documents as it wants other agencies to be. For example, it would be appropriate for CVESD to provide the police with documentation of any suspensions it may have imposed on Mr. Kinlock in previous years. The second story below states, "It wasn't until he was in 7th grade that the alleged victim spoke out." That was five years ago. So why did CVESD keep Kinloch in the classroom for several more years, until the police stepped in and arrested him?

Teacher to be tried in child sex case
U-T San Diego
Anthony Millican, spokesman for the Chula Vista Elementary School District, said the district has made two requests for records from the U.S. Department of ...

A young man testified in graphic detail Thursday, describing how he was molested by a former teacher after school in the classroom of a Chula Vista charter school.

Former teacher John Kinloch was arrested in November 2012 as part of a national child pornography bust, accused of posing as a 13-year-old girl to befriend boys ages 12 to 16 through a website.

At the time of his arrest on child molestation charges and child pornography charges, the 41-year-old had been teaching for 14 years and had passed background checks designed to protect students in the Chula Vista Elementary School District.

The alleged victim, identified in court as “John Doe 1”, met the defendant when he was a student in Kinloch’s 2nd grade class at Feaster Charter School on Flower Street.

The 7-year-old would often hang out in the teacher’s classroom every day until about 6 p.m. according to the teen's testimony. The two would sometimes go out to dinner together. After, the student would walk home or Kinloch would drive him home, he said.

Then, when the child was in 3rd grade, “John Doe 1” said Kinloch asked him to take off his clothes. The teenager testified he didn't want to do it but didn't want to get his former teacher upset.

The alleged victim, now 17, didn’t make eye contact with the defendant while testifying. Kinloch shook his head as if in disagreement with what the teenager was saying several times during the testimony.

“I didn’t want to whatsoever but he just kept dragging it on and sort of getting aggravated where he’d sigh deeply and show that he was getting sort of mad so I didn’t want to make him too upset so I did,” the teenager testified.

The abuse continued as the child moved into the 4th grade with the defendant allegedly asking the child to expose himself “many times” but touching the boy’s genitals only occasionally, according to testimony.

The teenager stated the alleged molestation happened on school grounds at least twice when the classroom door was locked. The molestation continued for five to six years the teenager testified.

He lived at home with his mother and two sisters at the time. He said his father was never around much. The teenager testified that he started hanging out with Kinloch because he thought he was cool.

The teacher and his former student would tell each other “I love you” when others weren't around the teen testified.

It wasn't until he was in 7th grade that the alleged victim spoke out. He said he kept hanging out with Kinloch because he wanted to get past it and would attempt to delay the act of undressing when asked.

He admired Kinloch for other things and said the former teacher taught him manners and how to be a good person.

Under cross-examination, the teenager said he read several news accounts of Kinloch’s arrest and was angry about the allegations.

“John Doe 1” was the first of three alleged victims who were expected to testify in the case against the former teacher.

He also faces six additional lewd act charges involving a third victim who was 14 or 15 between 1996 and 1998 when he alleges inappropriate contact. The incident allegedly occurred when Kinloch was 24 or 25 and not working as a teacher.

Kinloch was teaching first grade at Wolf Canyon Elementary School at the time of his arrest. He was placed on unpaid leave of absence during criminal proceedings.

If convicted of all charges, Kinloch faces 450 years to life in prison.
Posted by Maura Larkins at 1:19 PM

Mr. Kinloch was not only kept in the classroom after these accusations first came out several years ago, he was welcomed back on the Feaster Campus with open arms after his initial arrest in December 2012. I witnessed it with my own eyes and have him on video in the crowd during an after school assembly and performance. At the time we hadn't hear the horrific news, but days later we did and were mortified. A quick internet search of his name also brought up a full story published int he Reader in 1998, so I'm highly confused at the District claiming no knowledge.

Maura Larkins, please contact Attorney ElaineHeine at 858-764-2487 or elaineheine@gmail.com regarding John Kinloch. I am an attorney representing a minor in a civil case against John Kinloch and Chula Vista Elementary School District.

Thank you for sharing such great information. can you help me in finding out more detail on convent school in gurgaon