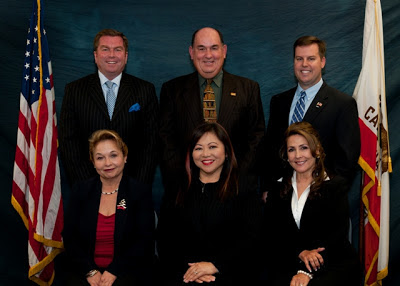 I am shocked. Bonnie Dumanis' Public Integrity Unit has indicted a white male Republican. Jim Cartmill has learned the hard way that he can't count on Bonnie anymore. But the D.A. has spent years going after people in the South Bay that Jim Cartmill wanted to destroy politically, so he should man up and pay the piper.

After Being indicted, former CVESD trustee Bertha Lopez (currently on the Sweetwater Union High School District board) said she has nothing to hide. In fact, she has been covering-up crimes at Chula Elementary School District for over ten years, along with CVESD board members Pamela Smith and Larry Cunningham. Teachers were pressured to perjure themselves to conceal the wrongdoing of Bertha and her fellow board members. The board included Pat Judd and current Chula Vista mayor Cheryl Cox.

The Union Tribune has long been a fan of Bertha Lopez.

A probe into corruption among South Bay school leaders has widened to include another district, with indictments against three additional officials.

Two other Sweetwater school board members were charged a year ago, along with a former board member and former Superintendent Jesus Gandara.

Attorney James Pokorny, who represents Paul, Lopez and Cartmill, said the grand jury has indicted them on multiple felony and misdemeanor counts including perjury, filing false documents, accepting gifts and bribery. He said they maintain their innocence.

“My take on this is that DA believes that they can target people in the community that have given their energy and lives for betterment of students and that they can topple these people and cripple them from running for office ever again,” he said. “Knowing the people the way that I do, I don’t buy what they are accused of, and I don’t think a jury will either.”

The District Attorney’s office declined to comment on the case.

Pokorny said he received a letter from the District Attorney’s office notifying him that his clients had been indicted, but has not seen the full indictment. He said that Lopez faces 19 felony and misdemeanor counts, Cartmill faces 10 counts and Paul faces six.

Paul admitted in a June deposition in an unrelated lawsuit that he had taken $2,500 in cash from a contractor seeking work from his district. He said the handoff in the parking lot of a steak house was a campaign contribution for a school board member.

It is not clear if the indictment stems from that incident, which has been under review separately by a federal grand jury.

Paul’s name has already appeared in some documents related to the Sweetwater corruption investigation, in which prosecutors are alleging meals, sporting events, plays and other considerations were exchanged for multimillion dollar construction contracts.

Paul and his wife, for instance, are listed in court documents as guests at a $1,700 meal at Morton’s steakhouse in July 2008 hosted by contractor Henry Amigable.

Other guests included three of those facing charges in Sweetwater — Gandara, former board member Greg Sandoval and current trustee Pearl Quiñones. They have all pleaded not guilty.

Amigable pleaded guilty to a misdemeanor in May and is cooperating with county prosecutors.

Lopez and Cartmill largely stayed out of the fray as their colleagues were charged a year ago, although Lopez’s home was raided a year ago and she has been questioned in connection with the case.

“The district attorney is doing their job and I don’t have anything to hide,” Lopez said the day of the raid. “That is the bottom line.”

I found another white male Republican that Bonnie has indicted. The case is discussed in this article about the bizarre and unsuccessful prosecution of Steve Castaneda:

...Since 2007, only one case lodged by the unit against an elected official has resulted in criminal punishment. Former Encinitas Councilman Dan Dalager was fined $1,000 in 2011 after he pleaded guilty to a misdemeanor conflict-of-interest charge stemming from accepting deeply discounted appliances from a store owner, then voting in the owner’s favor in a dispute with the city. His case was prosecuted after the transaction was exposed by The Watchdog. A lot is riding on the outcome of the latest cases, also sparked by initial reports from The Watchdog about the relationships between contractors and officials in South County...
Posted by Maura Larkins at 3:47 PM

This criminal law blog is one of my favorite ones. I want to gather contacts of all good US lawyers in Attorney Directory. Hope to see your contacts in this directory, for example in the section of Arizona criminal attorneys. Please. tell about this possibility to all good lawyers you know.

Really i like it. This is supper blog about criminal law. Thanks for sharing nice information about Click here.....