Is anybody missing the pompous Bob Watkins at San Diego County Office of Education? 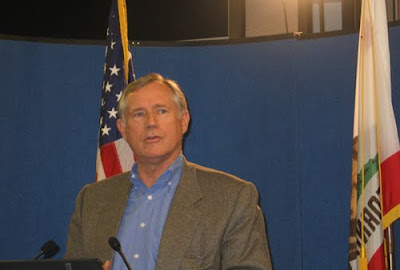 If Bob Watkins is as rich as he claims to be, why doesn't he pay for his own plane tickets?

See all posts about Bob Watkins.


A Voice of San Diego reader asks Bob Watkins (above), "What are you? Marie Antoinette in drag?"

Here's a chance to get some insight into the attitudes of Bob Watkins, who was on the board of San Diego County Office of Education for the past many years. Watkins is now chairman of the Airport Authority.

Airport Officials Continue Flying (and Dining) In the Lap of Luxury
By ROB DAVIS
Voice of San Diego
Aug. 9, 2009

...Though they had the option to pay $950 to fly economy, [San Diego Regional Airport] authority Chairman Bob Watkins and board member Bruce Boland upgraded to business-class fares. So the public paid $11,000 for the tickets instead of $1,900...

Employees have flown to Los Angeles on four occasions for meetings instead of driving. Those flights have cost as much as $820 each.

Watkins said he went on the London trip to help identify customers for Zoom Airlines, which briefly provided nonstop service between San Diego and London before the company bankrupted, a business failure that cost the authority $81,000. He said he went to the Chargers game and reception "to continue to help develop relationships."...

Watkins said the latest issues voiceofsandiego.org identified weren't alarming and hadn't been raised by the authority's internal auditor -- whose staff has expensed dinners costing as much as $89. The $435,000 budgeted for 2009 travel is less than a percent of the airport's total budget, Watkins said.

He suggested that a voiceofsandiego.org reporter couldn't relate to business class travelers because the reporter didn't make enough money. Watkins compared voiceofsandiego.org's examination of authority expenses to a "person who works for the Internal Revenue Service who’s making $40,000 a year and goes in and audits someone who lives in a $1 million home or $2 million home. They’re going to be skewed in terms of, 'Wow, I don’t have that.'"

[Maura Larkins comment: IRS rules are clear, Bob. And don't be so sure that the IRS guy isn't thinking, "Wow! I'd never want that in my house."]

Watkins said the authority's expense reimbursement policies were a "guideline" and needed to have flexibility.

[Maura Larkins comment: Go Lani! It's nice to be on the same side as SDTA for a change.]

Has anyone ever heard a more aloof, clueless, and arrogant statement from a public official? The rules don't apply to rich people, Mr. Watkins? Your expense account is being paid for through user fees charged on us ordinary people, but we're too poor to understand why you need deluxe travel to an overseas Chargers game? What are you, Marie Antoinette in drag?

Here's an idea: call the mayor and tell him he made a big mistake appointing a pompous person like yourself as Chairman, resign your appointment immediately, repay the airport authority for all your "official" travel, and then use your ample personal wealth to pay for all your own perks from here on out!

It's becoming a trend when we confront public officials about extravagant spending on the public dime: You just don't get it.

"Have you ever tried to eat on $25? I promise you it is very difficult to do," the San Diego schools chief told us last spring while defending taxpayer-funded meals of venison and fancy Japanese beef.

Bob Watkins, the chairman of the San Diego airport authority, tried a similar approach when asked about an $11,000 first-class airfare for two to London among other expenses...

After the story ran, it became clear that Watkins' explanation for why he had to go to London wasn't holding up. He had said he went there to support an airline -- Zoom -- but it turns out this airline had gone belly up two months before his trip.

Yesterday, Watkins offered another explanation for taking the trip.

The aforementioned schools chief has changed his ways: He's flying coach and has cut back on other expenses.

To help illustrate the whole spending story, our media partners at Ch.4 cox and Ch. 7/39 swooped in with a video version of the story. You can watch it here to catch up.

RE: The Airport Authority's attitude on expending the public's money: It is clear from Bob Watkins' statement:

"The public can trust us because we are not flagrantly violating the rules."

A lot of work went into Midge Costanza's opinion piece that appeared Dec. 23 in The San Diego Union-Tribune.

The staff at GCS Public Relations spent 16-and-a-half hours researching, editing and polishing the article, titled "Who will lead on our airport issue?" Costanza, president of the Midge Costanza Institute, a non-partisan public policy group, met twice with Rick Cook, a partner at GCS. They worked to make Costanza's words more conversational. They discussed a submission strategy. Cook twice spoke with Bernie Jones, the Union-Tribune's opinion page editor, and kept him updated on the article's status.

The bill for GCS's work came to $3,140, according to invoices. The San Diego County Regional Airport Authority paid it.

But anyone reading the article would have had no idea that the authority's public relations team had shaped Costanza's words. She does not work for the authority, and the opinion piece did not divulge the authority's role in drafting it. It appeared to be one person's concerned opinion, not part of an orchestrated campaign by a public organization...

Alpine resident Bob Watkins was re-elected as President of the San Diego County Board of Education Wednesday at the board’s first meeting of 2008.

Watkins, the president and chairman of RJ Watkins Co., an international management consulting firm, said, “I am flattered that my colleagues think I’m worthy to represent them and the County Board of Education. The County Office of Education is doing a miraculous job, but there will always be work to do to see that all students get the best education possible.”

Bob Watkins' airport shenanigans are among his least damaging actions. If abusing expense accounts were the worst behavior officials engaged in, we'd be doing fine. We are seriously harmed when big decisions are made to benefit people in power and their friends. Both VOSD and the SDUT are to be congratulated for recent stories looking at how decisions have been made by the San Diego County Office of Education during the years Bob Watkins was on the board. SDCOE officials Randy Ward, Lora Duzyk, Diane Crosier, Rick Rinnear and Dan Puplava seem to be suing or getting sued with unprecedented frequency. A Bob Watkins-style culture seems to permeate SDCOE. I think Dianne Jacob gave this story its due; she's got bigger fish to fry, such as how SDG&E got its pals on the city council to approve power shut-offs in the back country without requiring that SDG&E work on undergrounding power lines or at least repairing them.
Posted by Maura Larkins at 8:45 PM