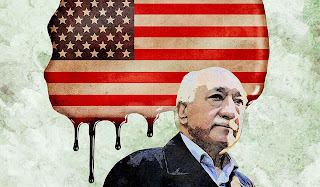 No one everwants a Cosby moment, a moment when all of one’s suspected bad deeds are exposed to the world. Fettulah Gulen, the undisputable leader of the Gulen Movement was recently provided such a Cosby Moment, compliments of the FBI. Mr. Gulen, a Muslim cleric from Turkey, with an elementary education only, is a mysterious fellow.

In cables divulged by WikiLeaks, the U.S. Department of State described Mr. Gulen as “a ‘radical Islamist’ whose moderate message cloaks a more sinister and radical agenda.” He is reputed to be worth roughly $25 billion, although no one seems to know from where he earned this tidy sum. Most notably and despite the Department of State’s perspective, he espouses principles of tolerance and multiculturalism.

Yet upon deeper investigation, he is a true, dyed-in-the-wool Islamist who wishes to transform the United States and Turkey into Shariah states. Mr. Gulen lives in the United States in self-imposed exile, a seat from which he runs a vast and questionable network of charter schools and overlapping nonprofit organizations and businesses, and, as evidence presented in U.S. and Turkish courts shows, actively agitates and plots the overthrow of the democratically-elected government in Turkey, one of the few stable allies the United States possesses in the Middle East, a NATO-member and the lynchpin to defeating ISIS and to bringing peace to Iraq and Syria.

As the proprietor of the largest network of charter schools in the United States, Mr. Gulen receives hundreds of millions of taxpayer dollars. Active investigations into the financial malfeasance of the Gulen schools are ongoing in Texas, Louisiana, Illinois, Ohio and other states, this, in addition to an active investigation by the FBI. According to state and local law enforcement reports, the Gulen Movement, in collusion with various nonprofit organizations and companies directly linked to the Gulen Movement, are playing a sort of shell game with taxpayer funds. Gulen schools pay high rental fees on properties owned by Mr. Gulen, construction and renovations of Gulen facilities are performed by Gulen businesses and vast sums are spent on facilitating the entry of young Turkish men to the United States...

A secretive Islamic movement is trying to infiltrate the U.S. military by establishing and operating publicly-funded charter schools targeted toward children of American service personnel.

That charge may sound like a conspiracy theory from the lunatic fringe, but it is real and it is happening right now.  The most immediate threat is in Nevada, where Coral Academy of Science Las Vegas (CASLV) is currently negotiating with the United States Air Force to locate a charter school at Nellis Air Force Base, with classes starting this fall.  What is not widely known is that CASLV is part of a nationwide organization of charter schools and other businesses headed by Islamic cleric Fethullah Gülen, a reclusive but influential Imam living under self-imposed exile in Pennsylvania to avoid criminal prosecution in his native Turkey.

Our law firm has been engaged by the Republic of Turkey – a key NATO ally in a hotbed region – to conduct a wide-ranging investigation into the operations and geopolitical influence of the Gülen organization, which is behind the Coral Academy of Science and over 140 other public charter schools scattered across 26 American states.  Our investigation, still in its early stages, reveals that the Gülen organization uses charter schools and affiliated businesses in the U.S. to misappropriate and launder state and federal education dollars, which the organization then uses for its own benefit to develop political power in this country and globally...

Robert R. Amsterdam is founder of Amsterdam and Partners LLP, an international law firm based in Washington, DC and London.

What We Don't Know About Gulen-Linked Charter Schools, And Why That's a Problem
Jersey Jazzman
July 16, 2016

This week's attempted coup in Turkey will inevitably turn the spotlight on Fethullah Gulen -- the primary political rival of Turkish President Erdogan -- who lives in seclusion in Pennsylvania. Gulen is linked to a network of over 160 charter schools operating across the country, including several in New Jersey that Governor Chris Christie has recently praised...
- A USA Today investigation found that Gulen-linked organizations paid for Congressional members and staff to travel to Turkey at least 214 times. Expenses total at least $800,000, but that figure is likely understated because it does not include in-country expenses.

Given what's just happened, this lack of transparency is a real problem for our country's national security. If, in fact, Hizmet was one of the driving forces behind the attempted coup, the United States may well be complicit in allowing a charter network to grow in this country that provided de facto support for the attempted overthrow of one of our NATO allies' governments.

I don't have any expertise in Turkish politics. By most accounts, Erdogan is not a friend of democracy and freedom of the press, and that's very troubling. And Gulen denies any involvement with the coup attempt, even though Erdogan is now saying the US risks its continuing alliance with Turkey if it continues to harbor him.

At this point, we must ask: Has it been in America's best geopolitical interest to prop up Erdogan's primary political foe by allowing an aligned network of charter schools to grow across the country? Has the risk been worth what are, at best, marginal gains in test scores for student populations that, at least here in New Jersey, look nothing like the populations of their hosting public school districts?...
Posted by Maura Larkins at 11:02 AM