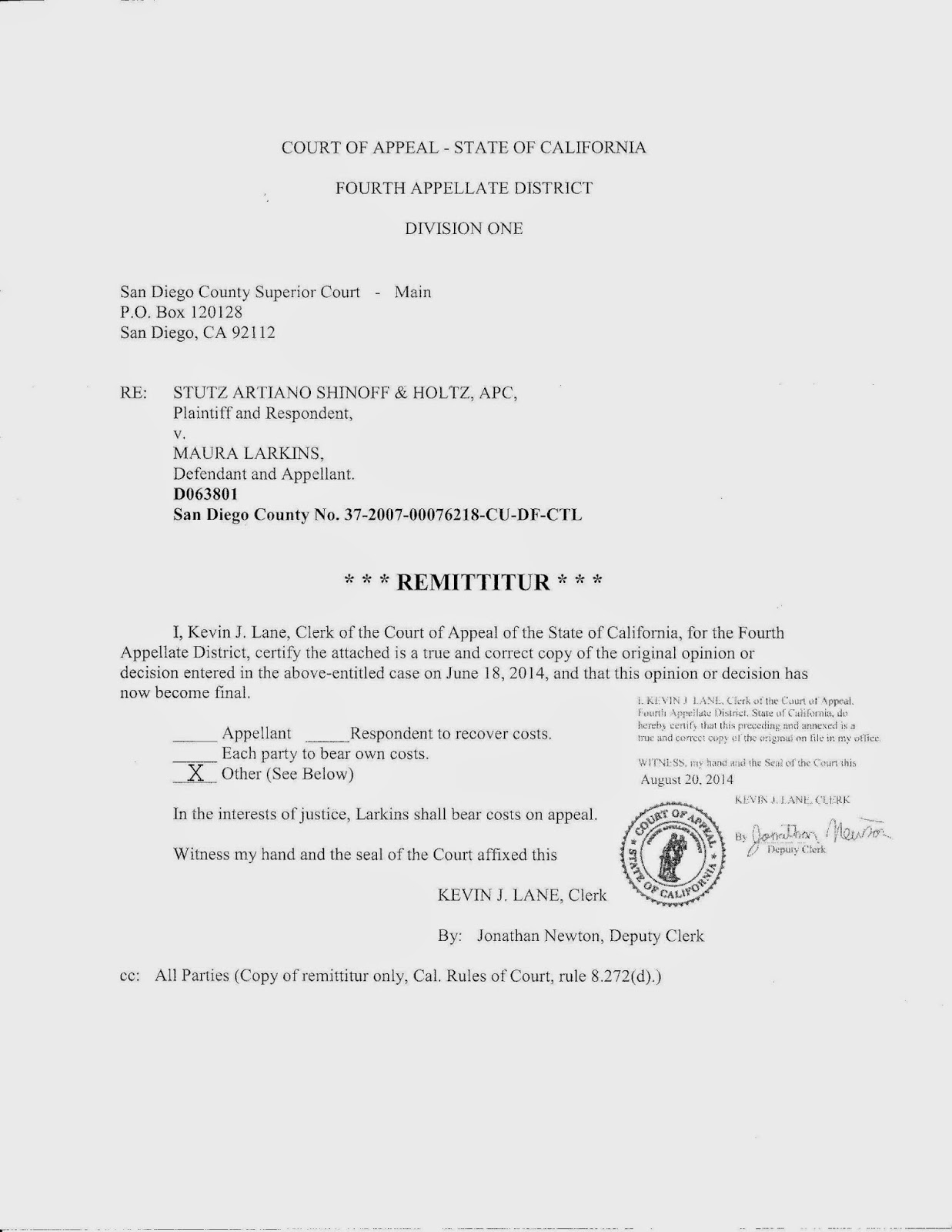 See all posts regarding this case.

On August 20, 2014 the Court of Appeal issued a remittitur in Stutz v. Larkins.

But Judge Judge Hayes issued a new judgment two weeks earlier--on August 6, 2014--in San Diego Superior Court!  [In typical fashion, Judge Hayes didn't bother to have her clerk serve me with the judgment.  I didn't know about it until I was served with a copy by plaintiff on August 19, 2014.]

I have no idea why the Court of Appeal bothered to issue the remittitur.  Judge Hayes certainly wasn't waiting for it.

UPDATE: It turns out that there's case law that says that Judge Hayes did not have jurisdiction on August 6, 2014 to issue a new judgment:


‘Until remittitur issues, the lower court cannot act upon the reviewing court’s decision; remittitur ensures in part that only one court has jurisdiction over the case at any one time.”  (People v. Saunoa (2006) 139 Cal.App.4th 870, 872.)

Don't ask me.  I still don't understand why she felt it was in the interest of justice to throw out my opposition to summary judgment because I made a small mistake in format.  For good measure, she also threw out my evidence (which seems sort of redundant, right?) and then granted plaintiff's motion for summary judgment.

NO WEIGHING OF EVIDENCE, NO JURY TRIAL FOR DAMAGES

Why didn't Judge Hayes want to weigh the evidence?

And then why did she rant and rave about defamation ever since, as if the evidence had been weighed and there had been a factual finding of defamation?

Judge Hayes granted default four years after granting summary judgment.  She then awarded nominal damages of $30,000 based on the fact that there were TWO (yes, 2!!!) Internet searches for Plaintiff in a certain month.

Here's what I wrote in my Opening Brief regarding the $30,000 in "nominal" damages:

The calculation for the $30,000 is based on a ludicrous,
unreasonable and illogical conclusion drawn from Exhibits D and E...
If the trial court had looked at Exhibit E of the prove-up, it would
have seen that visitors to Defendant’s site were looking for CVESD, CTA,
MEA, Fagen Friedman Fulfrost, Emily Shieh, Voice of San Diego Education,
Procopio, Kaiser Permanente, Vickie Gilbreath, medical records,
insurance, the new teacher project, Cornell, Bonifacio Bonny Garcia, CTA
lawyer, and Councilman Castaneda.

These two queries would appear to


It was unreasonable for the trial court to order Defendant to pay Plaintiff
$.43 every single hit on the site, when almost all of the hits were by
Defendant herself; search robots; visitors who only stayed on the site a
second or two; people looking for health and insurance information--
particularly Kaiser Permanente; visitors wanting information about
schools, education and San Diego politics; or non-Plaintiff lawyers.


The Court of Appeal backed-up Judge Hayes, also based mostly on technicalities.

Erasing information on my websites

I've been working hard erasing web pages and blog posts that could be considered violations of  Judge Judith Hayes' injunction.

In the past couple of months I've depublished hundreds of blog posts and erased or edited several web pages.  I'm starting to erase web pages with public records:

Posted by Maura Larkins at 5:11 PM