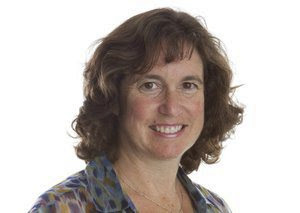 Was it SDUSD Superintendent Cindy Marten (above)
who convinced reporter Mario Koran that student test scores are no
longer of any interest to anyone in San Diego Unified for measuring
teacher performance? Or was it one of Voice of San Diego's donors?

Voice of San Diego education reporter Mario Koran isn't a big fan of objective measures of teacher quality. In the story below, he gives the impression that the current, failed practice of having principals do subjective teacher evaluations is just fine. Just because one school can improve without reforming this policy proves absolutely nothing. There have always been some schools that did a good job--but those schools were successful in spite of, not because of, having subjective teacher evaluations.

“The [San Diego Unified] district is focused on finding a way to replicate success like Marshall after it grew disillusioned with the school reform movement,” VOSD’s Mario Koran reports, “which focuses intensely on test scores as a way to gauge progress, and is now looking for a measurable alternative.”

I would suggest that the district use the test scores intelligently, focusing intensely on the 10% of teachers who get the best improvement in student scores year after year.

It appears that VOSD doesn't want to focus on highly effective teachers any more than CTA does; they both prefer power politics for deciding which teachers are listened to.

Schools don't know who the best teachers are. The current process of principal evaluations (that often involve no classroom observations) is highly lax and political. Bad teachers with influence often get good evaluations; good teachers who don't support the agenda of the principal are often not fully acknowledged.

Schools would benefit if they had clear, unbiased information about which teachers were fully effective. For one thing, the best teachers could do training of other teachers, saving the obscene costs of hiring consultants selling the latest gimmick is monstrous.

But unbiased evaluations would interfere with school politics--and district politics. It would allow people to advance who weren't necessarily popular and politically connected--people who might change things, disturbing the smooth surface that covers up the dysfunction in our schools.

The Case That Could Blow Up Teacher Tenure
By: Mario Koran
Voice of San Diego
April 28, 2014

DDunn
District Tenure:
In reading the San Diego board meeting agenda item re: Central Office Reorganization. This is when and how the district moves and shuffles worn out people and positions to create the illusion that something is improving. However some of the names and faces have been around and moved around for years. Not much will change, except the job titles and pay grade - look a bit deeper.

As for teacher evaluations - what is in place via State Assembly Stull Bill is quite adequate. It's the follow through by administrators that fails. Specifically, if an administrator finds a teacher as "needs improvement" or "not satisfactory", that administrator is required by contract to develop a plan (with a stringent timeline) to bring the teacher up to satisfactory - and this can take up to 2 years, and few administrators actually know how or what to do. (see SDEA contract Performance Evaluations). Also, by contract, an administrator can opt for a Special Evaluation at any time - but the plan, timeline, and work involved is heavy.

Now for student/parent evaluation input. Professionals need to be evaluated by professionals. So, next time you're out for diner with the family and get a "How'd we do" card from your server, hand it to your 10 year old to fill out. And for parents - your child is not the same child in class as she/he is at home...Sorry!

@DDunn But that rich guy Bill Gates says.....Gates "wants the country to spend $5 billion for every teacher in every classroom in every district to be filmed in action so they can be evaluated and, maybe, improve."

The philanthropist has dedicated resources in the last few years to identifying and developing effective teaching. His foundation funded the $45 million MET project designed to determine how to best identify and promote great teaching. They enlisted the help of 3,000 teachers and many experts to determine the best way to do this.

As for the Gates Foundation, this idea has been brewing for quite some time. Thomas Kane, a professor of education and economics at the Harvard Graduate School of Education and the director of the MET project, said in a 2011 interview with Education Next that there are a lot of advantages to having cameras in classrooms. He said:

One is it gives you a common piece of evidence to discuss with an instructional coach or supervisor. Second, it will prove to be economically much more viable because you’re not paying observers to drive around to various schools to do observations. If a teacher doesn’t think that their principal is giving them a fair evaluation because of some vendetta, they can have an external expert with no personal ax to grind watch and give feedback. (Thomas J. Kane, a professor at Harvard, testifies for the plaintiffs in Vergara v. California)

I agree with you that administrators tend to be very neglectful when it comes to working with weak teachers. But another problem is the principal's original evaluation of a teacher. Principals are in a difficult situation: they are vastly outnumbered by the people they're evaluating. They can be bullied by teacher cliques. As a result of this, and as a result of simply being fallible human beings, many principals give good evaluations to teachers who are their friends or allies, and bad evaluations to teachers who disagree with them. It would make more sense to have evaluations done by unbiased individuals, and let the principals do the follow-up. Also, it would be easier for principals to help teachers improve if they weren't the ones who gave the bad evaluation in the first place. The teachers couldn't tell themselves that the evaluation was biased, and they'd trust the principal more.

...A: An evaluation process is something that should be highly relevant and meaningful to our most effective educators, as well as helpful for our educators who are struggling. I always look at evaluation as a tool and a resource. I look at what I call growth and development of our teachers. And do we have an evaluation system that allows us to give meaningful, relevant feedback on an ongoing basis. It shouldn’t be once a year or twice a year where an administrator comes in a room and sits in the back for 45 minutes. Feedback needs to be something that’s ongoing and a teacher finds it most relevant when the principal knows instruction, the principal knows what high-quality teaching and learning looks like, knows when you’re able to deliver a lesson that meets the needs of every learner in the class not just learners that are struggling or learners that are achieving at high levels. I expect my principals to be in classrooms all the time...

One other part that got a lot of attention was parents and students. I think that’s one that people are very interested in and that parents and students are a part of a system that gives meaningful feedback to our educators. Vision 20/20 (the district’s long-term plan) was adopted by the board before I even began. The mission and vision around that is to have a quality school in every neighborhood, and we’ve defined quality as more than the API score, more than a test score.

Posted by Maura Larkins at 7:36 PM