Susan Luzzaro refuses to apologize for lapses in journalistic ethics; reveals that her daughter is on the CVE bargaining team 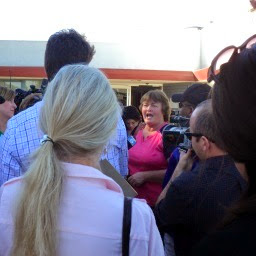 See all posts re Common Core in SDER blog.

When I called out San Diego Reader reporter Susan Luzzaro on April 15, 2014 for her biased reporting about Common Core testing in Chula Vista Elementary School District, I thought I knew exactly how much she had compromised her journalistic ethics. It turns out, I didn't know the half of it.

I was shocked to read the following in an April 19, 2014 article by Ms. Luzzaro:

"...Chula Vista Elementary’s public relations officer, Anthony Millican, followed up by intimating it was unethical for me, as an author, not to have disclosed in the April 10 testing article that my daughter is a member of the Chula Vista Educator’s bargaining team. Millican also stated in an April 18 email, “You should have got our side of the issue in the first place”...(emphasis added).

Say what??? Susan Luzzaro's daughter is a member of the CVE (Chula Vista Educators) bargaining team?!?

I had no idea! What is going on, Susan Luzzaro??? How could you have concealed that information from your readers when you were attacking CVESD?

(I checked the latest "bargaining update" on the CVESD website, and found that Vanessa Luzzaro-Braito, who seems to have suddenly changed her name to Vanessa Braito, is listed as a member of the CVE team. I'm going to make a wild guess that the reason for the name change is to conceal the fact that she is Susan Luzzaro's daughter. While I'm at it, I think I'll make another wild guess: I bet Vanessa Luzzaro-Braito does not like Common Core. Do I have any takers on that bet?)

I notice that Susan Luzzaro expresses no remorse about her ethical lapse. Instead, she seems to be offended that Mr. Millican would "intimate" that her behavior was unethical. Ms. Luzzaro seems to believe that it's okay for her to behave as she does, but it's not okay for others to talk about it.

If she really believes that there's nothing wrong with her actions, then why is she upset that people are discussing them?

Ms. Luzzaro's attitude, and certainly the attitude of the San Diego Reader, seems to be expressed in the contemptuous headline of Susan's latest story: "Hey, Chula Vista Elementary School District, test this".

Ms. Luzzzaro has made no effort as of April 22, 2014 to balance the reporting in her April 10, 2014 story, "Standardized tests shunned by South Bay parents." After reading the story, one might be forgiven for believing that ALL parents at CVESD oppose the testing. Ms. Luzzaro does not appear to have made any effort to talk to parents who approve of Common Core and the associated testing.

WHY IS THE TEACHERS UNION ATTACKING COMMON CORE?

Susan Luzzaro is clearly trying to shift responsibility away from teachers who are having problems teaching basic concepts as required by Common Core. These teachers want to go back to methods that rely largely on rote memorization. See "Teachers who don't know how to teach are complaining about Common Core in Chula Vista Elementary School District." 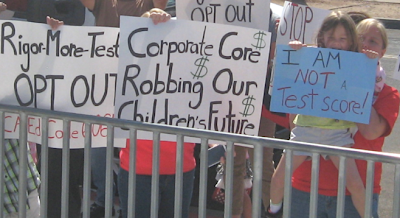 Instead of retracting the false implication in her April 10, 2014
story that kids may be held back if they do poorly on a standardized
test, Ms. Luzzaro and the Reader reinforce the false impression with
a photo of a child being hoisted up by her mother, holding a sign that
says, “I am not a test score.” The photo dishonestly implies that the
district will change its treatment of the child based on a test score.
Shame on Susan Luzzaro and the Reader—and the parent who created that sign!

ANOTHER CASE OF COMPROMISED ETHICS AT THE READER?

All this is causing me to wonder if Dorian Hargrove's "mistake" in this story about Stutz Artiano Shinoff & Holtz v. Larkins was really a mistake. In his story about me, Mr. Hargrove said that I had written a statement about Stutz law firm that was, in fact, written by an anonymous commenter on my blog. I let Mr. Hargrove know about the error right away. When I asked him to correct it, he refused to do so, saying, "It happens."

At the San Diego Reader, such happenings are apparently not considered grounds for an apology or retraction.

I will be presenting my oral arguments in Stutz v. Larkins in the Court of Appeal on May 16, 2014 at 9 a.m.. I won in August 2011 in this separate appeal in this same case. This bizarre free speech case has dragged on for over six years. Click HERE to see all posts regarding this lawsuit.

I have severely criticized CVESD on numerous occasions, but I support Core and the associated testing because it is in the best interest of students.

Posted by Maura Larkins at 8:12 AM