With $60 million in grants, troubled Castle Park Elementary is trying to climb out of the mire created by Libia Gil, Richard Werlin and Jim Groth 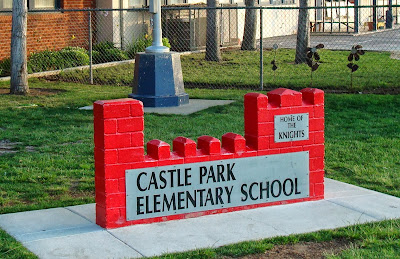 Castle Park Elementary, the troubled school I attended as a child and taught at as an adult, deserves a break. But I'm not sure that's what it's getting, even with $60 million in grants to the neighborhood.

Here's a comment by a reader of the Chula Vista Star-News:

What could have been a great opportunity for honest dialogue unfortunately turned into something quite different: the Secretary of Education being spoon fed Ed Brand's scheme of the hour. Yes, principal Bleisch has created quite a stir, but what is the substance? Some might say, as long as the kids go to school and the district gets the funding, it's all ok. But is it?

What are the students learning from this? I hope the public is learning that they need to be involved.

I agree with the commenter. The network of corrupt officials in San Diego schools is fostered by San Diego County Office of Education. SDCOE protects officials who should be long gone. Why can't some of the $60 million in grants be used to clean up corruption in South Bay? Because the people involved in the grants are closely connected to the school districts, and they all protect each other. The public needs to know more about what's going on in schools, behind the red-painted windows.

See all posts re Castle Park Elementary School from this blog and from CVESD Reporter. 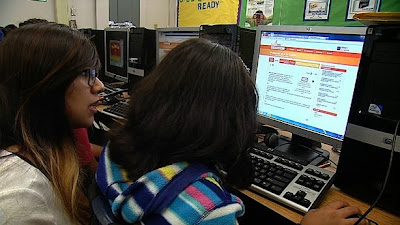 How A Federal Grant For Promise Neighborhoods Is Changing A Chula Vista Community
By Kyla Calvert
KPBS News
October 3, 2013

CHULA VISTA, CA — Ten-year-old Emily Jimenez Ayon wants to be a doctor. To do that, she knows she’ll need to go to college. And to get there she’s willing to make some sacrifices. For the moment that includes giving up her Qiunceañera, which is kind of like a coming out party that many Mexican-American families throw for their daughters’ fifteenth birthdays.

“I want to save the money for when I get into the university," she said.

That’s right – she wants the money to go toward the cost of college. Her mother, Gladys Ayon, said this is a new outlook for her daughter that came after a few weeks of summer camps provided through a program called Promise Neighborhood.

“Before, we didn’t talk a lot about it," Ayon said in Spanish. "But the people from Promise came with the mentality of helping the mothers from the time they’re pregnant and helping them so that their children do well, and little by little, get to college.”

Castle Park’s Promise Neighborhood program is one of about a dozen Promise Neighborhoods operating across the country. The federal government has set aside about $100 million over the last three years for programs like these. Last year, a partnership of almost 30 organizations in Castle Park received a $28 million, five-year grant to provide what’s being called "cradle-to-career" support for the neighborhood’s children and families.

“We saw a lot of gaps in services and we saw a lot of what was keeping kids from being successful in school or keeping kids from going to college,” said Kathryn Lembo, CEO of South Bay Community Services, the group leading the Promise Neighborhood. “You had parents – 96 percent of the parents – saying they wanted their children to go to college and they talked to their kids about it. But then when you asked them what they were talking to them about, it was that, “we can’t afford it, you can’t go to college.”

But changing that mentality is a tall order in a neighborhood like Castle Park, where English proficiency is low, two-thirds of adults don’t have a high school diploma and more than half of households do not have a full-time breadwinner. That’s why they have to start early.

“There’s an early learning network and that has to do with preventing any gaps or getting rid of the gaps kids have even before they enter school," Lembo said.

A preschool that opened this year on the Castle Park Elementary campus where students are learning in English and Spanish is part of that network. It also includes newborn home visits by staff from family clinics and parenting classes called Universidad de Padres, or Parent University. Those classes are giving Gladys Ayon tools to get involved with her daughter’s education...

Tutoring is a really effective way of learning and retaining lessons. Many are excelling in their subjects with the help of elementary ed tutoring. They understand more.

I devoured a couple of articles published on your blog and found them genuinely considerable. The way you keep imparting your valuable insights here is appreciated.
Tuition Service Lucknow | Home Tuition Service