The $4 Million Teacher
South Korea's students rank among the best in the world, and its top teachers can make a fortune. Can the U.S. learn from this academic superpower?
AMANDA RIPLEY
The Wall Street Journal
Aug. 3, 2013 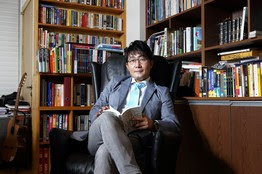 Kim Ki-hoon [above] earns $4 million a year in South Korea, where he is known as a rock-star teacher—a combination of words not typically heard in the rest of the world. Mr. Kim has been teaching for over 20 years, all of them in the country's private, after-school tutoring academies, known as hagwons. Unlike most teachers across the globe, he is paid according to the demand for his skills—and he is in high demand.

Kim Ki-Hoon, who teaches in a private after-school academy, earns most of his money from students who watch his lectures online. 'The harder I work, the more I make,' he says. 'I like that.'

Mr. Kim works about 60 hours a week teaching English, although he spends only three of those hours giving lectures. His classes are recorded on video, and the Internet has turned them into commodities, available for purchase online at the rate of $4 an hour. He spends most of his week responding to students' online requests for help, developing lesson plans and writing accompanying textbooks and workbooks (some 200 to date).

I traveled to South Korea to see what a free market for teaching talent looks like—one stop in a global tour to discover what the U.S. can learn from the world's other education superpowers. Thanks in part to such tutoring services, South Korea has dramatically improved its education system over the past several decades and now routinely outperforms the U.S. Sixty years ago, most South Koreans were illiterate; today, South Korean 15-year-olds rank No. 2 in the world in reading, behind Shanghai. The country now has a 93% high-school graduation rate, compared with 77% in the U.S.

Tutoring services are growing all over the globe, from Ireland to Hong Kong and even in suburban strip malls in California and New Jersey. Sometimes called shadow education systems, they mirror the mainstream system, offering after-hours classes in every subject—for a fee. But nowhere have they achieved the market penetration and sophistication of hagwons in South Korea, where private tutors now outnumber schoolteachers.

Viewed up close, this shadow system is both exciting and troubling. It promotes striving and innovation among students and teachers alike, and it has helped South Korea become an academic superpower. But it also creates a bidding war for education, delivering the best services to the richest families, to say nothing of its psychological toll on students. Under this system, students essentially go to school twice—once during the day and then again at night at the tutoring academies. It is a relentless grind.

The bulk of Mr. Kim's earnings come from the 150,000 kids who watch his lectures online each year. (Most are high-school students looking to boost their scores on South Korea's version of the SAT.) He is a brand name, with all the overhead that such prominence in the market entails. He employs 30 people to help him manage his teaching empire and runs a publishing company to produce his books.

To call this mere tutoring is to understate its scale and sophistication. Megastudy, the online hagwon that Mr. Kim works for, is listed on the South Korean stock exchange. (A Megastudy official confirmed Mr. Kim's annual earnings.) Nearly three of every four South Korean kids participate in the private market. In 2012, their parents spent more than $17 billion on these services. That is more than the $15 billion spent by Americans on videogames that year, according to the NPD Group, a research firm. The South Korean education market is so profitable that it attracts investments from firms like Goldman Sachs, the Carlyle Group and A.I.G.

It was thrilling to meet Mr. Kim—a teacher who earns the kind of money that professional athletes make in the U.S. An American with his ambition and abilities might have to become a banker or a lawyer, but in South Korea, he had become a teacher, and he was rich anyway.

The idea is seductive: Teaching well is hard, so why not make it lucrative? Even if American schools will never make teachers millionaires, there are lessons to be learned from this booming educational bazaar, lessons about how to motivate teachers, how to captivate parents and students and how to adapt to a changing world.

South Korean students prepare to take the standardized exam for college admissions on Nov. 10, 2011. The country has a 93% high-school graduation rate.

The most radical difference between traditional schools and hagwons is that students sign up for specific teachers, so the most respected teachers get the most students. Mr. Kim has about 120 live, in-person students per lecture, but a typical teacher's hagwon classes are much smaller. The Korean private market has reduced education to the one in-school variable that matters most: the teacher.

It is about as close to a pure meritocracy as it can be, and just as ruthless. In hagwons, teachers are free agents. They don't need to be certified. They don't have benefits or even a guaranteed base salary; their pay is based on their performance, and most of them work long hours and earn less than public school teachers.

Performance evaluations are typically based on how many students sign up for their classes, their students' test-score growth and satisfaction surveys given to students and parents. "How passionate is the teacher?" asks one hagwon's student survey—the results of which determine 60% of the instructor's evaluation. "How well-prepared is the teacher?" (In 2010, researchers funded by the Bill & Melinda Gates Foundation found classroom-level surveys like this to be surprisingly reliable and predictive of effective teaching in the U.S., yet the vast majority of our schools still don't use them.)

"Students are the customers," Ms. Lee says. To recruit students, hagwons advertise their results aggressively. They post their graduates' test scores and university acceptance figures online and outside their entrances on giant posters. It was startling to see such openness; in the U.S., despite our fetish for standardized testing, the results remain confusing and hard to interpret for parents. Once students enroll, the hagwon embeds itself in families' lives. Parents get text messages when their children arrive at the academies each afternoon; then they get another message relaying students' progress. Two to three times a month, teachers call home with feedback. Every few months, the head of the hagwon telephones, too. In South Korea, if parents aren't engaged, that is considered a failure of the educators, not the family.

If tutors get low survey marks or attract too few students, they generally get placed on probation. Each year, Ms. Lee fires about 10% of her instructors. (By comparison, U.S. schools dismiss about 2% of public school teachers annually for poor performance.)

All of this pressure creates real incentives for teachers, at least according to the kids. In a 2010 survey of 6,600 students at 116 high schools conducted by the Korean Educational Development Institute, Korean teenagers gave their hagwon teachers higher scores across the board than their regular schoolteachers: Hagwon teachers were better prepared, more devoted to teaching and more respectful of students' opinions, the teenagers said. Interestingly, the hagwon teachers rated best of all when it came to treating all students fairly, regardless of the students' academic performance.

Private tutors are also more likely to experiment with new technology and nontraditional forms of teaching. In a 2009 book on the subject, University of Hong Kong professor Mark Bray urged officials to pay attention to the strengths of the shadow markets, in addition to the perils. "Policy makers and planners should…ask why parents are willing to invest considerable sums of money to supplement the schooling received from the mainstream," he writes. "At least in some cultures, the private tutors are more adventurous and client-oriented."

But are students actually learning more in hagwons? That is a surprisingly hard question to answer. World-wide, the research is mixed, suggesting that the quality of after-school lessons matters more than the quantity. And price is at least loosely related to quality, which is precisely the problem. The most affluent kids can afford one-on-one tutoring with the most popular instructors, while others attend inferior hagwons with huge class sizes and less reliable instruction—or after-hours sessions offered free by their public schools. Eight out of 10 South Korean parents say they feel financial pressure from hagwon tuition costs. Still, most keep paying the fees, convinced that the more they pay, the more their children will learn.

For decades, the South Korean government has been trying to tame the country's private-education market. Politicians have imposed curfews and all manner of regulations on hagwons, even going so far as to ban them altogether during the 1980s, when the country was under military rule. Each time the hagwons have come back stronger.

"The only solution is to improve public education," says Mr. Kim, the millionaire teacher, echoing what the country's education minister and dozens of other Korean educators told me. If parents trusted the system, the theory goes, they wouldn't resort to paying high fees for extra tutoring.

To create such trust, Mr. Kim suggests paying public-school teachers significantly more money according to their performance—as hagwons do. Then the profession could attract the most skilled, accomplished candidates, and parents would know that the best teachers were the ones in their children's schools—not in the strip mall down the street.

Schools can also build trust by aggressively communicating with parents and students, the way businesses already do to great effect in the U.S. They could routinely survey students about their teachers—in ways designed to help teachers improve and not simply to demoralize them.

before a teacher even enters the classroom.

No country has all the answers. But in an information-driven global economy, a few truths are becoming universal: Children need to know how to think critically in math, reading and science; they must be driven; and they must learn how to adapt, since they will be doing it all their lives. These demands require that schools change, too—or the free market may do it for them.

—Ms. Ripley is an Emerson Fellow at the New America Foundation. This essay is adapted from her forthcoming book, "The Smartest Kids in the World—and How They Got That Way," to be published Aug. 13 by Simon & Schuster.
Posted by Maura Larkins at 8:18 PM